Two simple changes to make today that you and your family won't even notice:

Switch from Olive/Canola oil to GrapeOla.  It's better for your heart and full of omegas that the other two don't have.

And there you have it.  Easy easy easy.
Posted by Melissa at 9:24 AM No comments:

My body is suddenly into the art of self sabotage without my permission!

After a year or so of being acid reflux free I am suddenly  having back to back episodes usually when I'm hungry.  When I eat it settles down, then about an hour later it flares again.  I'm not hungry.  I'm just wondering what gives here?

Now,  NOW even at night it's flaring so that I'm having trouble sleeping and otc meds aren't even putting a dent in it.  I don't want to go on soft bland foods, they're full of bad stuff that I want to avoid!  I don't want to go back on the prescription meds because they reduce the amount of acid in my stomach which hampers digestion which causes bloat and weight gain....sigh! I just want my stomach back to normal.  Weight loss is supposed to help get rid of acid reflux not make it worse. grrrrr.

I walked the loop at Tellico 2 and 1/4 times, the other 3/4 I ran.  I haven't run that far since  junior high school when we had to run for the Presidential Physical Fitness tests.  I wasn't terribly tired and probably could have gone farther if it hadn't been for the pain from the shin splints.  A good heart thumping, pulse pounding set of tunes on your mpg palyer keeps you so occupied that you don't realize  how far you've gone until you just can't go another step.  I love it!

I kind of splurged this afternoon at The Olive Garden on Asiago and Chicken ravioli.  Good.  Fattening. It'll be okay in the long run as long as I don't overdo again for a while.

Posted by Melissa at 6:58 PM No comments:

Before and In Progress Pics

So, I lied about the bad pics...actually I didn't.  The pics that were taken a couple of days ago sucked pond scum.  My boys have pretty good eyes for picture taking so they made my newest pics.

I even decided to do a before and in progress segment.  Hope no one remains physically or mentally scarred  after this =) 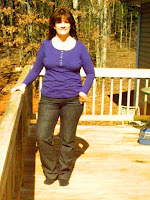 Where are the pics?

They're hiding, terrified to let anyone see how bad they were.  Eeeesh!  Just goes to show no matter how much weight you lose, the closer to 200 pounds you are the worse the picture is.  We'll try it again in 2 weeks because I have to have my 'after/in progress' pics' ready for AOL by then.

I put medium  auburn back in my hair, not a good idea. I've used the color several several times before and got rave reviews, this time....I'm not happy.  I'm going back to medium ash brown.

I'm in love with Maybelline Rewind makeup, especially the primer.  My face face feels smooth as silk and the makeup looks like a professional artist applied it.  Can't say the same for my hair.  I just haven't been happy since I moved to Tellico.  I miss Star Makers!

I seriously need to go clothing shopping. I hate panties that crawl.  When they're now too big for you, they crawl big time, bunch up in the most uncomfortable of places, and make huge pantylines so your pants look like they're too tight when they're not.

And Bras....my cup size is still pretty much the same, but I had to downsize from a 42 to a 38 because at the tightest point they were so loose that they would twist around whileI was moving.  Nothing like having to stop, put your bra back in place then continue where you left off.

My favorite shoes are now too big.  TOO BIG!  Who'd a thunk losing weight would make your feet shrink?  But that's okay.  I can wear real boots now, not those ankly high deals because my calves are so big they won't be stuffed into knee high boots.  I'm in love with so many styles I feel a serious shoe fetish coming on in the next year.

I'm struggling with shirt sizes.  I'm somewhere between a XL, L, and Medium.  Shirts have become a serious WTH! issue with me.

I'm still afraid of dresses because of the big turkey butt looking stomach still in the way.  Man if that big hunk of skin would go away I'd be in a 10 or 8.  The only thing to take it off is cardio.  The first place you gain is the last place you lose so that means I'm going to have a big tummy and butt for a while longer because cardio is a big problem due to lack of resources. Only one short trail in Tellico.  The trail in Madisonville is overrun with pervs there to view the kiddies on the playground, pets aren't allowed (means big dawg has to stay home) and I'm so not going there alone.  I don't have room for a treadmill.  I do have a recumbent bike.

The other thing that will take it off is surgery and I don't have the money for that, unless someone wants to be generous and toss several thousand dollars in my direction?  Huh? Any takers? No?  didn't think so  =(

I've been shopping modest bikinis, yes, there is such a thing.  I cringe.  They're rather ugly but I also don't want to show off a bunch of skin, especially the flappy boobs that are a result of pregnancy, breast feeding, age, and weight loss, unless someone is going to....nevermind...I already know the answer to that.

How do people afford surgery?  honestly.  I know young adults who've gone under the knife and they don't have any more money than I do.  What gives?

Anyway, pics will be up by the 28th.  Because they have to be lol!
Posted by Melissa at 2:56 PM No comments:

I first started trying to get myself back in shape mostly for me, up until my husband decided to point out that, in his opinion, I was third rate, then it was 'oh buddy game on'.  It still is, except he has decided that if he wants me to do something that he should now insult me to make me mad enough to do it.  After all, he made me mad enough to lose some weight right?  Wrong.  He didn't say that to make me lose weight, he said it to hurt me, and he did just that.  The hurt is still there.  It probably will never go away, but I'm learning to live with it. I might not be able to do anything about getting older but I sure as hell can do something about my weight and appearance.

When I finally dropped under 200 pounds, I didn't say much of anything.  I took myself out Saturday and purchased some new clothes. =)  When I walked into work in the new clothes that fit a little too well, I got a comment of 'You just keep getting skinny skinny."  and then the best one of all "OH MY GOD!  You have really lost the weight!" Ah, I have a waist again and I'll put pics up sometime tomorrow of the new smaller waistline showing off in the new clothes (size 14's I might add) I feel a little vindicated now, enough so to push even harder for the 140 by August.  It's going to take a lot of pure grit and determination to get there. BUT.  I will get there.  Because I will it so.  I have a mighty strong will =)

In the exercise department:
I've taken to running again.  I get a little further each time.  My shins don't hurt much anymore.  My lungs are mad at me for running in the cold but that too is starting to subside.  I love running.  It expends a lot of the agitation and feeling overwhelmed when I'm at home by myself.  It's stress relief.   I love being sweaty, even if it's 30 degrees outside.  I feel like I've accomplished something if I have sweat dripping off my eyebrows.  (how's that for a sexy hot image lol!)

I love my stability ball.  It requires so much concentration and attention to keep the ball in place while I'm exercising that I don't have the energy to think about problems at home or work or with the kids school work.  I can actually feel my six pack abs underneath the flabby baby belly.  Now if only that flabby baby belly would go away!  Which is why I run too.  Cardio helps the flabby belly go away.  Now if only I had an indoor heated pool.  I could swim some of the flabby belly off!

The recumbent bike bores the hell out of me, but when no time to run or too cold or icy/snowy....it'll do in a pinch.

When we had a tredmill it bored the snail snot out of me too...

2 lb soft weights and 3 pound dumbbells kick ass.  Who knew such light weights could cause so much havoc  on your muscles?

Light and medium resistance bands.  Those babies kick ass too.  Talk about sore afterwards.  Man you know when you've worked out with them.

Thinking I may add a jump rope routine to my repertoirre just for something different.  Has anyone seen those Pole Dancing, Lap Dance, Belly Dance weight loss videos?  I'm afraid, very afraid of those things lol!  However I'm also curious.  The instructors do have great bodies.  Meh.  I'll stick with tried and true for now.  Maybe something more exotic when I have a bit of a better body and I'm bored. ;p

I have an Anne Louise Gittleman Fat Flush Diet book on its way.  I've also considered body wraps and infrared sauna.  Anyone know anything about those?


I smell a bikini body by August!
Posted by Melissa at 8:41 PM No comments:

My home computer is down for the count so I'm working from a public library computer for a while.

How's the weight loss going for everyone?  I was bummed for a little while until I decided I was tired of being depressed over something I have control over.  It's when you make up your mind that things start to happen for you.  I weighed in this morning at 201.8 after weighing in Monday a week ago at 209.

I started running again, freezing cold or not.  I got my stability ball out of the closet and reclaimed my weights from the kids.  I changed back to eating better (not that I stopped, I had just gotten lazy about it) and the weight fell right off.  I added warm lemon water to my morning wake up routine and have lost several inches as a result of all of the above.  Try it. (Unless you're allergic to lemon, in which case you can use cucumber in your water instead)

That's all it takes.  Make up your mind. Dont' be wimpy and wishy washy. Just do it.


In other news, I'm taking a temporary leave from my current job to focus on family and my health since psoriasis has reared its ugly head in a nasty head to toe outbreak. sigh.  I'll be submitting my weight loss story to AOL;s That's Fit by the end of this month so be watching for the announcement when my story is up for viewing!
Posted by Melissa at 10:08 AM No comments:

My Favorite Week End Get Away

Curl up with a good read